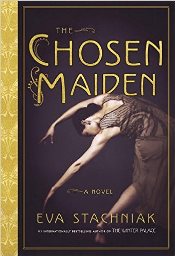 One can rely on Stachniak (The Winter Palace, 2012) for engaging, well-researched fictional portraits of dynamic historical women. As her story of renowned Polish ballerina and choreographer Bronislava Nijinska unfolds against the politically troubled backdrop of late nineteenth- through mid-twentieth-century Europe, readers become both active participants in her continual pursuit of creative excellence in dance and captivated spectators.

Born in Minsk to traveling professional dancers, Bronia’s early life and rigorous training at Saint Petersburg’s Imperial Ballet School are dominated by her older brother, Vaslav Nijinsky, depicted as an artistic genius whose daring performances motivate her—and overshadow her own talents. Around this time, ballet is moving from its formal, classical roots into more fluid forms of expression, and Vaslav and Bronia are part of this controversial transformation.

As she emerges as an innovative artist in her own right, Bronia’s working relationship with impresario Serge Diaghilev—founder of the Ballets Russes, her brother’s probable lover, and for whose company she dances and choreographs in Paris and elsewhere—is portrayed with skill. With striking depth of feeling, Stachniak brings us firsthand into the moments when Bronia embodies the onstage personas she creates.

The novel also illustrates her family life, including marital discord, Vaslav’s increasing mental instability, and the value of motherhood. A memorable literary rendering of a remarkable woman’s life.

The Chosen Maiden will be published by Doubleday Canada next Tuesday (464pp, trade pb, $18 US, or $24 in Canada). This review was submitted for publication in Booklist‘s January 1st issue.  While the publisher is Canadian, the book is being distributed in the US, so American readers shouldn’t have trouble obtaining it.