I debated whether to post a list of 2016 favorites.  Choosing from among those I’d read in the last year proved challenging, and I spent way too much time dithering over a list.  In the end, I decided I’d already made my decisions via Goodreads, so I should stick to it.

Goodreads has a nice display of my 2016 Year in Books.  I didn’t meet my challenge of 100 books read, instead getting to just 94 (Goodreads says 89, but I didn’t track manuscripts I’d read for friends, which aren’t in the system anyway, or books I’d read as an award judge).  For my choices on which to highlight in this post, I counted only books first published in 2016.

Okay, enough disclaimers.  Here are the 10 books I’d rated as five-star reads in 2016, arranged in no particular order. 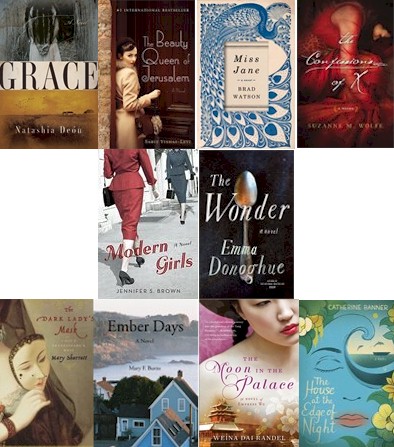 Natashia Deón, Grace – A deeply affecting novel about motherhood and freedom in the antebellum South, as seen from the viewpoint of an enslaved woman murdered just after her daughter’s birth.  Brave, unflinching, and memorable.

Sarit Yishai-Levi, The Beauty Queen of Jerusalem – This debut novel from an Israeli author became an international bestseller in  its original Hebrew.  It involved me fully in the daily lives, hopes, and sufferings of four generations of Sephardi Jewish women in 20th-century Jerusalem.

Brad Watson, Miss Jane – A beautifully contemplative novel about a woman from early 20th-century Mississippi (based on the author’s great-aunt) who was born with an unusual medical condition that precludes marriage but seizes what joy she can from life all the same.

Suzanne Wolfe, The Confessions of X – This imagined autobiography of the unnamed mistress of Augustine of Hippo is a poetic work of art, literary historical fiction set during an age — the shadowy fourth century AD — about which few historical novels are written.

Jennifer S. Brown, Modern Girls – In this warmhearted yet realistic novel, an immigrant mother and her Americanized daughter in 1930s NYC both find themselves unhappily pregnant. It’s full of wonderful details on Jewish life and customs at the time.

Emma Donoghue, The Wonder – In 1859, an English nurse travels to rural Ireland to investigate the case of a “fasting girl” and discovers a potential crime-in-progress. Devout Catholicism mixes with folk superstition in my vote for the most affecting, suspenseful read of the year.

Mary F. Burns, Ember Days – On the cusp of the 1960s, life-changing secrets emerge among the residents of the small coastal town of Mendocino, California. There are many characters and viewpoints, all distinct, and their religious beliefs, carefully interwoven without preachiness, allow for an abiding sense of hope.

Weina Dai Randel, The Moon in the Palace – This debut novel about the younger years of the future Empress Wu presents a young girl’s transition into womanhood at the imperial court of 7th-century China.  Far from a standard tale of royal intrigue, the writing provides entrance into a formal yet sumptuous world.

Catherine Banner, The House on the Edge of Night – A near century-spanning epic set on the fictional isle off the Sicilian coast, Banner’s debut novel combines the lively style of a folk tale with the realism of a meaty historical saga.  I found it engrossing and would love to visit Castellamare in person.

And there we have it, with just six hours to spare until the New Year.  Thanks very much for following this site, and I hope the next year will bring you lots of good reading!