Pachinko is a novel that exemplifies the word “epic.” Following the members of a close-knit family from a rural fishing village on a Korean island to various locales in Japan and elsewhere, it spans nearly 90 years and almost 500 pages. I would have been happy if it were longer.

It’s a big story, rich in character and activity. These aspects, plus the clean, straightforward writing style, make for a brisk, absorbing read. It opens in 1910 with the circumstances that lead to the birth of the principal heroine, Sunja, who grows into a sturdily built, handsome young woman. 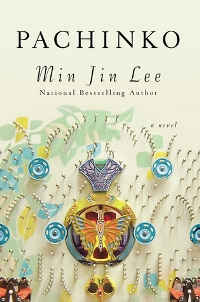 When a liaison with a wealthy fish broker leaves her pregnant, and Sunja learns he can’t marry her, one of the guests recuperating at her mother’s boardinghouse makes a surprising offer. Due to his frailty, Baek Isak never expected to wed anyone, but his Christian beliefs (he’s a Presbyterian minister from Pyongyang) and generosity of spirit leads him to ask for Sunja’s hand. When the couple relocates to Osaka and moves into Isak’s brother’s home in the Korean ghetto, Sunja views firsthand the plight of immigrants living in a country that doesn’t welcome them.

The novel was revelatory for me, as it introduced me to an aspect of history about which I’d known little. Between 1910 and 1945, Korea was a colony of Japan. Through the experiences of Sunja, her husband, in-laws, and descendants, we get to see the ramifications of this part of history. As one Korean man remarks in the novel, “For people like us, home doesn’t exist.” In Japan, Koreans are negatively stereotyped as belonging to a “cunning and wily tribe” and “natural troublemakers.” They can’t rent decent housing or obtain the best jobs. On the other hand, any Koreans who adapt to Japanese ways would be looked upon suspiciously back home. The members of the Baek family must always be on their best behavior, since they represent their country of origin.

Over the years, through constant toil, their fortunes rise. The meaning of the title (which refers to Japanese pinball gambling, a hugely popular activity there) isn’t obvious in the beginning but becomes clear in the novel’s later sections.

Pachinko tells a universal immigrant story, but it also offers enough specificity to provide a full picture of the geography and customs of 20th-century Korea and Japan. The novel’s scope lets readers see how the family acclimatizes themselves to an increasingly modernized Japan while keeping their own identity as Koreans. Because of the discrimination they face, it’s impossible for them to fully assimilate.

Two more elements of note. Writing instructors and readers often decry the use of “head hopping,” that is, the switching of viewpoints within a scene. Lee shows why this so-called rule was made to be broken. She uses this technique on occasion, but it’s performed subtly and has the effect of enhancing the scene’s emotional impact. Also, while Sunja often hears the adage that suffering is a woman’s plight, she and her equally industrious sister-in-law, Kyunghee, are the engines that ensure their family thrives and survives. The family’s men, while (mostly) decent and hardworking, aren’t always as fortunate. This emphasis felt curious to me; I couldn’t tell if it was meant to be symbolic of a larger theme or not.

If you don’t know anything about this historical era or part of the world, no need to worry. Lee will bring you into her characters’ world so completely so that they’ll feel like family. An engrossing historical saga, Pachinko’s themes are also significantly relevant to the world we live in today.

Pachinko will be published next week by Grand Central in hardcover and #ebook ($27 or $13.99, 496pp). Thanks to the publisher for approving my NetGalley access.