It’s easy to feel sorry for Mary Seymour. Daughter of Henry VIII’s widow, Katherine Parr, and her reckless fourth husband, who was executed for treason, Mary was orphaned by her first birthday. A burden to her relatives during her life, she was also obscure in death, which has gone unrecorded. Many assume she died as a child, but the speculation that she survived to adulthood presents a provocative “what if.” 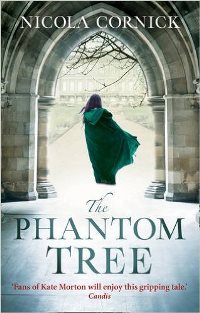 Nicola Cornick’s second romantic time-slip novel (after House of Shadows) is a historically rich work that uses this premise as the springboard for a story about an unlikely sisterhood that extends into two eras.

Alison Bannister, née Banastre, was born into the 16th century but has somehow been trapped in the 21st century for over a decade. She and Mary Seymour had spent their later childhood and adolescence together at Wolf Hall in Wiltshire, along with a passel of other orphaned cousins. Several years separate the pair, and their personalities are too different to allow for friendship: Alison is beautiful yet hard-edged, while Mary is innocent and naïve, and Mary’s higher social standing invites feelings of jealousy. Still, later circumstances compel them into a pact. Alison had helped Mary flee a dangerous situation at Wolf Hall, and in exchange, she demands Mary’s assistance in finding the son she was forced to give up.

Unable to return to her own time, Alison has made a new life for herself in modern England but doesn’t let herself get close to anyone; she remains haunted by her lost child. Her first clues on what happened to him emerge via a portrait of Mary, which she finds while browsing an antique shop in Marlborough. Unfortunately for Alison, examining the painting’s provenance and the objects depicted within it means reconnecting with an old flame, Adam Hewer, a rising celebrity historian who’s staked his career on its identification as a newly discovered Anne Boleyn portrait.

Adam shows dubious professional judgment, as do the portrait’s modern authenticators, but he’s willing to concede he may be wrong. Several mysteries are carefully woven through both timelines. What became of Alison’s son? What forced Mary to leave Wolf Hall? What’s the true identity of the mysterious man who communicates telepathically with Mary? Perhaps written as a touching homage to Mary Stewart’s classic Touch Not the Cat, Mary’s secret relationship with this man she’s never seen is often her sole source of hope.

Cornick’s portrait of country life in Tudor England is presented with a tactile clarity that avoids romanticizing the time. One can feel the damp chill that pervades Wolf Hall in winter, smell the ripe odors of the local market, and observe how women’s powerlessness gives rise to discord and rancor. Alison’s under no illusion about a woman’s lot back then – if not for her missing son, she’d stay put in 2016 – and a wonderful scene of her present-day visit to a medieval church illustrates this. Moreover, Alison’s attempts to locate the past via modern clues demonstrate how much the past remains with us.

There were traces of history everywhere: in street names, on inn signs, in old tracks and ancient hedgerows, buried walls and tumbled gravestones. Scratch the surface and it was there.

The Phantom Tree is a skillfully written multi-stranded mystery with thoughtful reflections on two women’s quests for belonging. Read it not only for its evocation of the 16th century but for greater appreciation of the conveniences and freedoms we take for granted today.

The Phantom Tree was published by HarperCollins UK’s HQ imprint on 29 December (£7.99, paperback).  Thanks to the publisher for approving my NetGalley access; this is the second stop on the book’s blog tour.