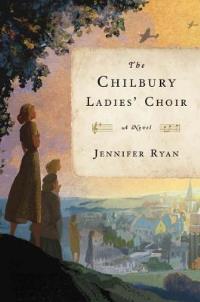 “There’s something bolstering about singing together.” Jennifer Ryan’s charming debut interweaves many women’s voices to create a strong chorus that rings out with heart and the celebration of life.

The story spans barely five months in 1940, but it’s an eventful time for Chilbury, a small Kentish village seven miles from England’s coast. With most men off at war, the vicar disbands the choir, but as with so many other home front duties, Chilbury’s women take up the reins. Their female-only singing ensemble, daring for its time, is successful in more ways than one.

Their stories are told through their writings, and each woman’s account echoes her personality. There’s Mrs. Tilling, a timid widow and nurse worried about her only son in France; Venetia Winthrop of Chilbury Manor, a sophisticated flirt; Kitty, her attention-hungry younger sister; and Edwina Paltry, a conniving midwife. Kitty’s diary entries are fun, since they burst with enthusiasm and teenage melodrama as she dreams about her sister’s longtime suitor and reacts to her changing world.

In letters to her London-based friend, Venetia reveals how her affair with a mysterious artist turns into something more, to her astonishment. Mrs. Tilling’s growing courage to stand up for herself and others will have readers cheering, as will her growing closeness to the burly colonel billeted with her. Edwina’s involvement in a greedy baby-swapping scheme gets soap-opera silly, but her audaciousness never fails to entertain. The fifth and softest voice is that of Sylvie, a Czech Jewish evacuee.

As the village intrigues play out and the Nazi threat reaches England, shattering buildings and lives, shadowy men skulk about in the woods, and the women draw strength from their togetherness. Fans of The Guernsey Literary and Potato Peel Pie Society and the TV series Home Fires should put this uplifting, absorbing novel high on their reading lists.

The Chilbury Ladies’ Choir is published by Crown this Tuesday, February 14th in hardcover and #ebook.  The UK publisher is The Borough Press.  This review first appeared in February’s Historical Novels Review.