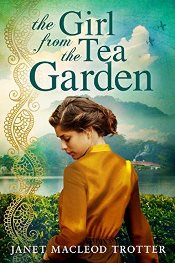 Janet MacLeod Trotter has been one of my favorite writers of regional sagas. She’s especially adept at delving into the lives of the working-class men and women of England’s industrial North East. Among other works, she transformed the stories of Catherine Cookson’s grandmother, mother, and Catherine herself into gripping biographical fiction (I reviewed Return to Jarrow in 2009). Her books were the only historical novels I saw for sale at the Beamish Open Air Museum when I visited there a few years ago.

Trotter’s latest books, the India Tea series, are based on her grandparents’ diaries and letters from when they lived in India in the 1920s-40s, and there’s some cross-pollination with her familiar English settings as the characters travel back and forth. The Girl from the Tea Garden is third after The Tea Planter’s Daughter and The Tea Planter’s Bride, which I haven’t read yet, but I’ve never minded arriving mid-way into a series. Enough background was provided for everything to make sense.

The heroine is Adela Robson, who’s an adolescent schoolgirl as the novel opens in 1933. The story follows her through the WWII years as she struggles for acceptance in a world that looks down on those of Anglo-Indian heritage (her maternal great-grandmother was an Assamese woman). Also, as a beautiful young would-be actress, Adela must also look past all of society’s distractions, which include a handsome playboy prince, to find her way back to the people and qualities she values most.

Adela develops a crush on steamboat captain Sam Jackman early on, after she sneaks a ride in his car while fleeing her hated boarding school on her way home to her family’s tea plantation at Belgooree. Her feelings are returned after she grows into adulthood. I liked Sam a lot. The survivor of a troubled childhood, Sam is a decent sort who gets things done but doesn’t crave attention for his honorable deeds. He also makes plain that Britain’s departure from India is inevitable and works toward this ultimate goal – although he feels he can’t be tied down emotionally to accomplish this. There were many times I found myself wishing for greater emphasis on Sam’s experiences and less on Adela’s flirtations and performances; there were also many side-stories, such as one involving a young Indian woman’s desperate plight, that I wished were pursued further. Also, in one instance in particular, Adela comes across as impossibly naïve.

Adela’s emotional journey is emphasized, and has some powerful moments, particularly when she travels to visit relatives in Tyneside and is faced with a life-changing decision.  I found the novel strongest in its depictions of complex family relationships and India’s alluring scenery, from the noise and color of the jungle to the wooded hills of Simla. Although I would have preferred greater focus on the many social issues facing India at the time, as a star-crossed love story, the novel works well.

The Girl from the Tea Garden was published by Amazon’s Lake Union imprint in December 2016; I read it from a NetGalley copy.